The power of sport in tackling mental illness

Find out how you can support research in this area.
Contact us at:

While experts have long touted the benefits of exercise as a means to prevent depression and anxiety, UNSW research is now working to address the full extent of how sports can tackle complex mental health conditions.

Today, almost half the population experiences a mental health issue at some point in their lives, at an estimated national cost of AU$28 billion a year. As the percentage of people suffering from poor mental health increases, so too does the need to ensure exercise is a viable option for them.

Research by experts in psychiatry, led by Dr Simon Rosenbaum – Scientia Fellow of UNSW Medicine – has identified the incredible benefits of incorporating basic sports and physical activity into the treatment plans of people with a complex mental illness.

Below are four examples of how Dr Rosenbaum’s research has helped to empower people living with mental illness to find motivation for exercise, substantially hasten the responsiveness of mental conditions to treatment, while also reducing the serious physical implications of mental illness. 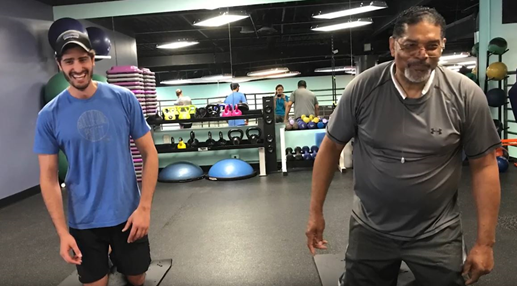 In undertaking his clinical research, Dr Rosenbaum saw clear signs that physical activity and sports helped to significantly hasten the response of mentally ill patients to treatment. Interestingly, this was not limited to more general conditions of depression and anxiety, but also to more targeted illnesses like post-traumatic stress disorder and schizophrenia.

During clinical trials he undertook at the St John of God Hospital, a private mental health facility in Sydney, Dr Rosenbaum and his team found in-patients suffering from severe PTSD had a greater response to treatment when regular time in the hospital gym was integrated into their care.

“We randomised half a group of patients to receive usual care, which is a combination of talking-based therapies and medication – and the other half to receive traditional care in addition to a structured exercise program,” he explains. “What we found was quite clear: that adding exercise to usual care had a significant effect in improving people’s symptoms, and not just symptoms of PTSD but also symptoms of depression and anxiety. It also improved their physical health simultaneously.”

Similar results were found demonstrating a positive effect of the exercise program on sleep quality, known to be poor among people experiencing PTSD. Importantly, as a result of this research St John of God hospital has now included exercise as a key part of its PTSD treatment program. 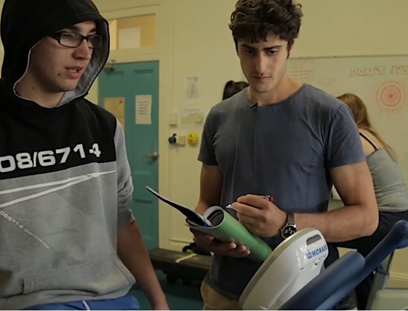 Dr Rosenbaum’s research also touches on the complex psychological barriers to physical activity, which is valuable for those suffering mental conditions.

“What we know is that physical activity is really helpful but often those who stand to benefit the most are also the least likely to be physically active,” says Dr Rosenbaum. “It’s difficult enough to motivate the general population to engage in regular exercise and choose a healthy diet. But in people living with mental illness, where poor motivation can be an inherent part of the illness, these barriers to a healthy lifestyle are compounded.”

Research has found that people with a severe mental illness cite low mood and stress as the most prevalent barriers towards exercise (61% of patients), followed by ‘lack of support’ (50%). In response, Dr Rosenbaum’s team is working on how best to provide patients with professional support to overcome psychological barriers, and maintain motivation towards regular physical activity.

“Our research is looking at how we can help to change the system and the structures around mental health treatment to actually support people to be physically active,” he says.

Writing on the topic of motivation and exercise more generally, Dr Rosenbaum highlights the danger of specific goal setting with exercise regimes, finding this can actually be counter-productive and in some cases makes it even harder to become active. If someone doesn’t meet their goal, or is at risk of viewing themselves as a failure - an incredibly common theme among those living with mental illness - then the person is more likely to give up.

“Findings suggest that instead of automatically relying on specific targets when we’re trying to become more active… open goals like ‘see how active you can be’ seem to be a great way to start,” he writes. “After that, you could focus on beating what you achieved last time, and on incremental improvements rather than lofty goals planned in advance.” 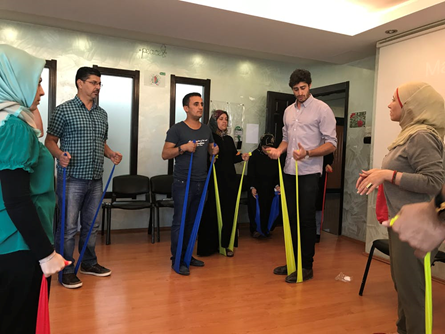 Dr Rosenbaum’s work also has significant global impact by investigating how sports and exercise can help displaced people in developing countries heal and regain trust and relationships. Refugees are at high risk of developing mental illness as the trauma of war and displacement greatly impacts an individual’s biological, psychological and cognitive functioning, as well as having a negative effect on human relationships and connections.

“A plethora of research has shown positive results pertaining to the building of social capital from participation in sports and exercise activities. The same benefits can be realised by people everywhere including those living in the most deprived conditions,” Dr Rosenbaum says. “We’ve recently been able to coordinate a group of researchers from 25 countries across 47 sites to see how we can promote the role of physical activity and sport for vulnerable populations including those living in displaced settings.”

Late last year, Dr Rosenbaum and his colleague Ruth Wells flew to Gaziantep in southern Turkey where about one in four people are Syrian refugees. While there, they explored the role that exercise might play in improving the mental health of Syrian refugees, and found that the response was very positive.

A more recent trip with colleague Shaun Nemorin to the Nayapara & Kutupalong Refugee camps in Bangladesh also saw Dr Rosenbaum explore the potential of sport to help ease the plight of Rohingya populations. Though the visit found that spirits and conditions were very low, for some members of the community physical activity was as a way to ease tension and sadness, and create social cohesion. However, a lack of equipment and designated space was a large barrier.

“Words cannot describe the utter deprivation that the Rohnigya inhabitants are exposed to,” Dr Rosenbaum says. Along with colleagues – Shaun Nemorin, Ruth Wells and Professor Zachary Steel – Dr Rosenbaum is now in the process of establishing a community fundraising initiative to support further research and sport interventions within the camp.

“Sports can do so much to help these people, where traditional therapy often isn’t favoured. When asked about things they do to alleviate own suffering, talking to a foreign stranger about their problems was unsurprisingly not high on the list. What was evident, however, were children wrestling in the mud, groups playing marbles, and men playing football. At the end of the day, if you give a kid a ball, they are going to kick it, and look for a friend to kick it with.”

Another key component of Dr Rosenbaum’s work is on heightening the attention paid to the fact that mental illness is often a leading cause of physical disorders. People living with serious mental health issues are significantly more likely to be obese, have impaired blood sugar levels (diabetes) and high cholesterol - risk factors collectively referred to as metabolic syndrome.

Unfortunately mental health professionals often feel unqualified to deal with physical health issues and so traditionally only focus on treating psychiatric symptoms. Though medication can be a crucial part of treatment, administering this in isolation may lead to physical health problems being overshadowed and inadequately treated.

"There’s a divide between the mental and the physical healthcare of people experiencing mental illness. It’s really important that treatment address both the mind and the body,” says Dr Rosenbaum. “A critical next step to promoting long-term change is ensuring health professionals receive appropriate training that prepares them to provide real world interventions for this vulnerable population.”

A number of key initiatives are now underway across the globe to ensure the mental health workforce is competent and confident in screening for physical health issues and routinely delivering evidence-based interventions. This has involved ensuring the mental health professionals themselves are highly familiar with the impact of sport and exercise science, as Dr Rosenbaum states that “it has to start with us”.

Congratulations to Emeritus Professor Brynn Hibbert AM FRSN, recipient of the The Royal Society of NSW Medal (2019)

Congratulations to the Centre for Marine Science and Innovation, awarded US$325,000 by the Gordon and Betty Moore Foundation