Jon Paparsenos (left), Vice-President Philanthropy presents UNSW donor Bill Manos (right) with a gift to thank him for his support of the UNSW Facing Equality exhibition - a prototype of a mural painted by Khadim Ali to commemorate the initiative.

Bill Manos discusses his support of a UNSW initiative to celebrate diversity, and what it means to truly address issues around inequality and disadvantage.

In 1950, Bill Manos and his family arrived on the shores of Adelaide, having fled the chaos and conflict of the Greek Civil War. The years that followed saw him quickly learn the strength that is born from adversity, and that success stems from a diversity of origins.

On arrival to Australia, no one in Bill’s family spoke English, nor had money or a formal education, but each of them was prepared to work hard for their fresh start. Before long, Bill’s older brother and sister had begun school, and his father Con got a job working in a factory, but sadly illness struck soon after.

“My father became quite sick, so my brother John had to drop out of school aged 14 to help support the family,” says Bill.

His sister Dorothy also left school after completing her primary education to help out at home. At just five years old, Bill quickly learnt to be more self-sufficient. Expected to also start school as soon as he was old enough, he walked himself down to the Westbourne Park Primary to enrol.

“There were no forms the parents filled in, there was no school selection, you just dropped in to your local school, sat in the room and the teacher would call everybody out one by one and enrol them,” he says.

When Bill successfully completed primary school, again he marched himself down to Unley High School where he enrolled and thrived. For his academic talents, he was offered a Bursary to attend the University of Adelaide, where he enrolled in law and economics.

While at university, Bill acquired an interest in politics, rising to become President of the Student Council. From hosting the esteemed Vice-Chancellor’s lunch at the age of 20 to founding his own law firm before his 30th birthday, Bill would often ask himself, “how did this happen?”

“I was a Greek immigrant kid whose parents struggled to get by and here I was with my own law firm while still in my 20s, it was amazing - only in Australia,” he says.

Bill’s career continued to grow and diversify, with experience being elected to Adelaide City Council where he developed an interest in urban design and the economics of cities and became the Deputy Lord Mayor.

After a decade in law, he co-founded property firm Mancorp, which for 25 years developed a strong portfolio of commercial investment properties. Eventually Bill moved to Sydney where he established Manos Capital in 2007, which he still runs today.

A chance meeting leads to a spur-of-the-moment gift

Though Bill’s background mirrors many in the UNSW alumni community, it was entirely by chance that he first became involved with our University.

While visiting Jessica Roth, founder of the Social Impact Hub, to discuss some projects they had been collaborating on, she had to cut their discussion short as she was on her way to another meeting. “She was on her way and said: ‘It's the opening meeting on the UNSW Grand Challenge on Inequality - Bill, you should come along, maybe you'll find this interesting’. So I tagged along.”

There he took part in an impromptu discussion about inequality with the initiatives academic leads, Professor Rosalind Dixon, Professor Richard Holden, and Scientia Professor Rob Brooks.

“During the course of the discussion I thought to myself, this issue of inequality is a fantastic subject for the university to be addressing. And it's a door into a whole lot of sub-issues that go under that,” he says. 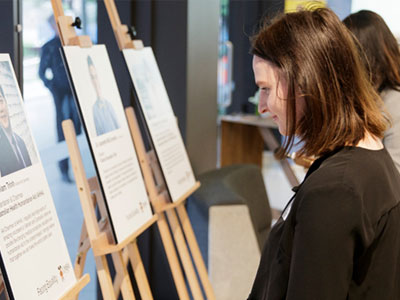 From there, the group launched a plan for the Facing Equality exhibition – a university-wide photo exhibition series in partnership with the UNSW Alumni and Engagement team to highlight the diversity of stories and faces from UNSW graduates. After the hardship his family faced during his childhood, and with an ongoing appreciation of Australia’s diversity, the initiative struck a chord with Bill.

“At the time they started to talk about the limited budget, which meant the photo exhibition could only be delivered on basic material and they’d love to do it with better quality. So on the spur of the moment, I said: ‘Well, how much is that going to cost?’ They said $30,000 was allocated to this so I said ‘well, if I give you another $30,0000, will you be able to do this properly?’ That's how it all started,” Bill explains.

From there, Bill became a close collaborator with Professor Dixon and Professor Holden, regularly catching up with them to discuss public policy issues and looking to support them in additional initiatives under the umbrella of the Inequality Grand Challenge.

“Bill was instrumental in helping us design and think through the objectives of the initiative, and in funding its roll out across different faculties. Each canvas is literally something we owe to Bill - and the entire vision greatly benefited from his wisdom and insight,” Professor Dixon says.

“This initiative gave our community powerful positive examples of the successes of graduates of different genders, cultural and religious backgrounds, and those from the LGBTQI+ community and with lived experiences of disability. Their stories were consistently inspiring, and a testament to courage and resilience."

A springboard for continued action on inequality

As the Facing Equality exhibition series has officially come to a close, Bill says he has thoroughly enjoyed his time collaborating with the UNSW academic community and looks forward to continuing his association with the University.

“I've been very impressed with the quality of the people that I've encountered at UNSW, and it was as much of a learning curve for me as anything else. I’ve met many academics and had great discussions with them all through the Facing Equality initiative, which has been fantastic.”

In addressing the grand issue of equality, Bill says overall he is pleased that universities are addressing ongoing challenges in this realm and acknowledging our broader role in both preserving and tackling inequity. “The fact that the University has undertaken the grand challenges program is excellent and a positive step,” he says.

Further still, he hopes this initiative will be a springboard to deeper conversation and analysis, to spur large-scale social change. He hopes to work with UNSW, among others, to develop a framework for driving this change.

“Inequality is a major challenge of our time, and a very deep one. It's only when you start understanding the big picture that you can then develop a framework to come back and deal with today's issues,” he says.

“Big issues need collective action, whereas individual initiatives can often be like a pebble in a pond. It's very difficult to create real change in society; we should be coming together collectively to do something about them.”

Though he notes Australia has a few hurdles to overcome, Bill is proud of the nation he now calls home, and his family has cherished their time here. “Australia is a world exemplar of absorbing different cultures in a peaceful, systematic way. I don't know what other country does this to the same degree,” he says.

“It exemplifies what this country has to offer, which we take for granted. The fact that my story can happen at all, and happened so readily, says something about the place. I feel nothing but good fortune and gratitude.”

At UNSW, every gift makes an impact